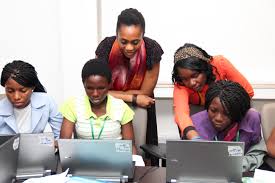 South Africa – The Esther Retreat was founded in April 2009 by Masentle Mokhele, a young social entrepreneur.  The organization focuses on skills development for previously disadvantaged young women who are currently in high school, tertiary and unemployed young women. Training courses in interview preparation, self–discovery and purpose,  entrepreneurship in tourism and computer literacy.

A 2010 GPA grant in the amount of $ 4771 allowed the organization to begin and train over 100 disadvantaged girls in Pretoria and Soweto South Africa to become computer literate at no cost to them.  At the conclusion of the grant period the organization had purchased 20 computers, conducted countless training courses for young girls in Soweto and Kliptown and supported instruction at two local schools.