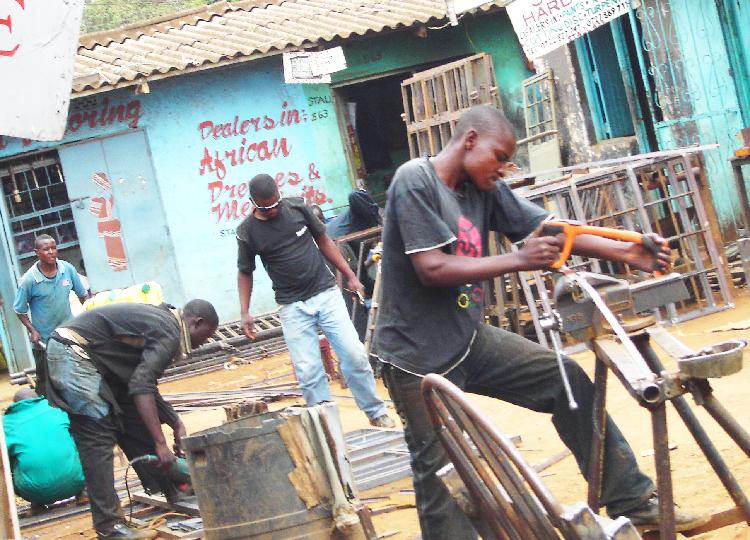 Kenya – Kibera is an informal settlement home to two million people in Nairobi, Kenya. Most residents earn less than $1.00 per day performing general labor.  The settlement is sprawling mass of tin and mud shacks with a smattering of stone buildings. A typical resident of Kibera lives with his family of 4 in a 12 foot x 12 foot mud walled room, with no electricity. Water is available at communal taps for a fee. Sanitation facilities are over stretched. The settlement developed a micro economy to accommodate the daily needs of residents which include various enterprises:  furniture building, consumer goods, foodstuffs, hardware, masonry, metal work and hair care.

Youth growing up in Kibera face many challenges unique to their environment, including crime and related insecurity, easy access to alcohol and drugs, prostitution and early age of sexual debut with all its attendant risks including teenage pregnancies and sexually transmitted diseases.  They are trapped in a cycle of poverty driven by their poor or non-existent education and lack of employment skills, relegating them to a lifetime of unemployment and poverty.

Since its inception in 2003, Kibera Hamlets has enrolled more than 350 youth members, from whom it draws its mandate. One of their expressly stated needs is that they wish to develop skills that will lead to employment or a micro enterprise.

In 2010 GPA awarded Kibera Hamlets a grant of $4926 to fund the skill building and mentorship program “Kibera Youth Can,”  a 12 month project that targets out of school youth within Kibera. A total of 140 youths will benefit (80 female and 60 male).

The project matched youth with an apprenticeship of their choice within Kibera and provided necessary transport to the training.  The goal of the project was not only to provide skill building but also create a mentorship relationship with trainers and provide additional empowerment opportunities, particularly for female participants.

At the conclusion of the grant period 140 youth had been trained in a skill.  30 had found immediate employment and 65 had started micro-enterprises.  Elders in the community report a reduction in crime and youth have become more responsible

Although Grace Akinyi appreciates the support given by Kibera Hamlets, she needs financial support to purchase more dressmaking materials to increase her stock. She says that with US $ 50, her business would expand two fold. She confessed that the apprentice program has made a remarkable change in her life. And her business is like a dream!!!